It's almost that time of year again. Campfire stories, haunted houses, trick or treaters and of course, watching scary movies in your Netflix cue. Thanks to the good people at Ranker.com , CritiX co-signs and brings you this list of supernatural, undead, slasher-ish disturbing material.

So, if you're like us and you love to compile a worthy list of thrillers ahead of time in order to better plan an evening with a special someone, warm blanket, bucket of popcorn during the Halloween season. Then here are 14 scary movies on Netflix bound to freak you out! 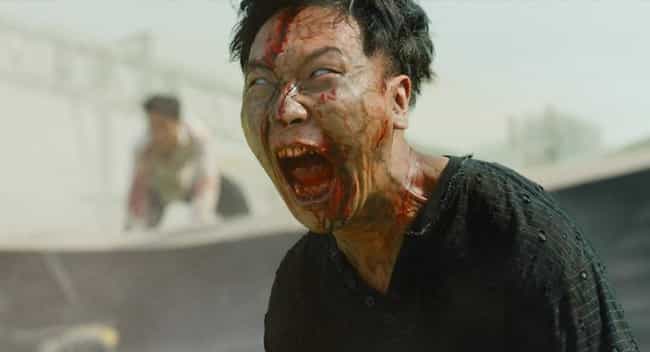 By now, everyone has seen plenty of zombie films, but few movies have been more harrowing than the apocalyptic South Korean film Train to Busan. Only a part of the film's horror stems from the zombies themselves - they swarm and run, crowding buildings and running down train cars, but director Yeon Sang-ho uses the film's particularly claustrophobic setting to his advantage.

The 2016 film centers around survivors of a zombie outbreak who are trapped on a train. Cut off from the rest of the world and in close proximity with the zombies, the passengers are gradually overtaken by fear. They soon find themselves turning against one another, with often heartbreaking consequences. 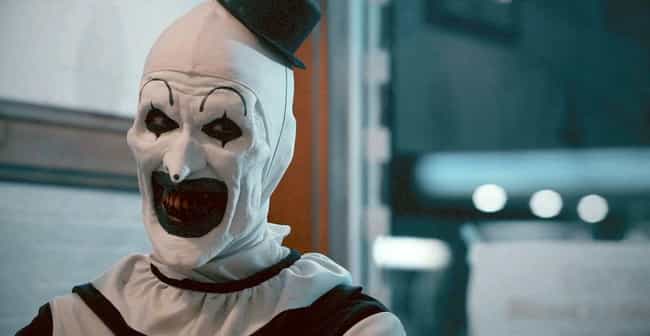 This aptly named 2016 film, which takes place over the course of one brutal Halloween night, is likely to push many viewers to the edge. Crammed full of unrelenting gore - all of it achieved with visceral practical effects - Terrifier's primary tool of unsettlement comes courtesy of its villain.

David Howard Thornton provides a skin-crawling performance as Art the Clown, a deranged slasher who is bound to give coulrophobes nightmares. Even those who don't care for the film's over-the-top brutality have acknowledged that Thornton's Art is creepy, and Terrifier is an effective throwback to the kind of movies "that got banned back in the video nasty era." 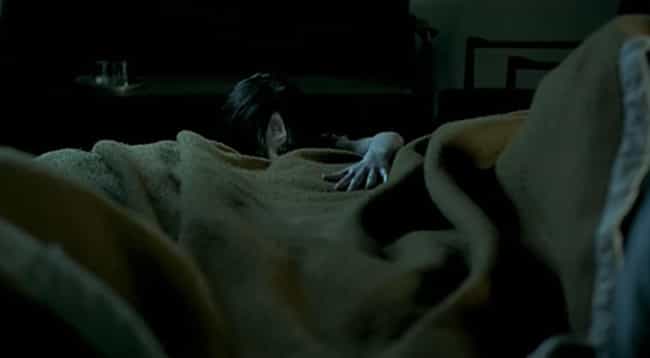 Shutter is a 2004 Thai film - one of the many Asian ghost movies that made their way to the States following the international success of The Ring. Shutter centers around a couple who commits a hit-and-run, only to find themselves haunted by what they assume is the ghost of the girl they struck.

The film's ghost is certainly spooky, but perhaps more unsettling is the background of human savagery and depravity that she brings to the surface. At the film's end, you may find yourself much more afraid of the living than those who have already passed.

As Above, So Below 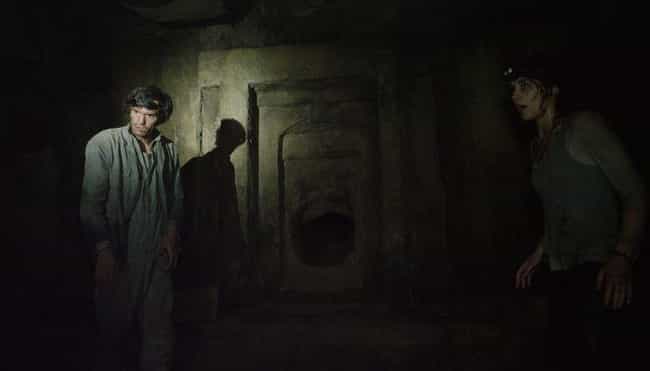 When well-made, found-footage horror movies add a certain element of plausibility to their proceedings, their freakiness can increase considerably. Of course, sometimes the most a found-footage film can offer is a bevy of bland characters and some shaky camerawork. When everything clicks, however, found-footage films can add that documentarian realism that really ups the creepiness ante.

As Above, So Below works more often than it doesn't, and the film uses its found-footage authenticity to fill its running time with much broader ideas than many movies in the same format ever attempt. The 2014 film follows a group of explorers who descend into the Catacombs of Paris in search of the philosopher's stone - the same one Harry Potter himself sought. As Above, So Below features plenty of spooky goings-on, but much of the film's freakish power must be credited to its setting.

The film was the first ever to secure permission from the French government to film within the actual Catacombs, a miles-long network of tunnels and mass graves that actually exists beneath the City of Light.

ee more on As Above, So Below

At more than two-and-a-half hours in length, this slow-burn 2016 South Korean thriller may be a little long for some, but it's plenty freaky for those who have the patience to discover its eerie charms. As a village is beset by unprovoked brutality and an epidemic of unexplained illnesses following the arrival of a stranger, it seems that something supernatural must be afoot, but the more the investigators attempt to unravel the mystery, the more questions they find, even as the events around them begin to hit increasingly close to home.

The film has received almost universal acclaim, boasting an impressive 99% score on Rotten Tomatoes, where the Critics Consensus raves, "The Wailing delivers an atmospheric, cleverly constructed mystery whose supernatural thrills more than justify its imposing length."

ee more on The Wailing

When you're looking for some thrills, nothing beats a creepy ghost story, and 2016's Don't Knock Twice features enough creeps and ghosts to fit the bill. While many of the movie's elements may seem familiar - a spooky house in the middle of a desolate lot where, if you knock twice on the door, something comes to get you - its focus is fairly original, centering around a sculptor (Katee Sackhoff) and her estranged daughter (Lucy Boynton) attempting to rebuild their relationship.

The film also builds up a mythology that - while sometimes cluttered - delivers plenty of creepy imagery. If you're looking for something in the vein of Insidious or The Conjuring to give you some goosebumps, you could do much worse than this chilly British spook show.

There are plenty of gooey practical effects in 2016's The Void - many of which are enough to disturb viewers on their own - but there are also some headier metaphysical concepts bandied about in this creature feature throwback to the films of John Carpenter and Clive Barker. After all, who can watch a bunch of masked cultists in creepy robes standing silently around a mostly abandoned hospital at night and not become a little perturbed?

For those who want Lovecraftian cosmic horror mixed with a liberal dose of tangible body horror and a distinctly '80s vibe, The Void should fit the bill nicely.

ee more on The Void28

As the first horror feature from the director of The Raid films, 2018's Apostle unsurprisingly gets pretty vicious before the credits roll. The film offers a slow burn of isolationist paranoia, religious fervor, and primordial horror, giving audiences plenty of opportunities to become riddled with goosebumps before any blood is even spilled.

Even Dan Stevens's lead role as a haunted man who infiltrates an island cult in search of his missing sister is probably enough to set most people on edge.

The Nightmare is a 2015 documentary about sleep paralysis from the director of Room 237. For those who are unaware, sleep paralysis is a real medical condition - sufferers find themselves semi-conscious while waking or falling asleep, but they are unable to move due to their brain's restricted activity.

This paralysis is often accompanied by vivid and terrifying waking dreams or hallucinations. For The Nightmare, director Rodney Ascher and his crew interviewed actual sufferers of sleep paralysis and then attempted to recreate their experiences on camera using horror film techniques.

The result is essentially guaranteed to give viewers a few sleepless nights.

ee more on The Nightmare

Widely considered unfilmable, Stephen King's Gerald's Game is a novel in which the main character spends the majority of the book alone in a room, handcuffed to a bed. Horror director Mike Flanagan - known for The Haunting of Hill House and other projects - incessantly puzzled over how to transform the premise into an engaging film since his college days.

In the 2017 film, Jessie (Carla Gugino) and her husband Gerald (Bruce Greenwood) head to their lake house in an effort to spice up their marriage, but their role-play quickly takes a dark turn when Gerald perishes of a heart attack shortly after (somewhat unwillingly) handcuffing Jessie to the bed. Left alone in the house and with no one around for miles, Jessie must somehow survive, even while her predicament forces her to confront childhood traumas and the truth of her relationship with her late husband.

Gerald's Game is a scathing, uncomfortable film, and even if the psychological horrors don't get to you, one of the gruesome actions Jessie must perform in order to escape her predicament certainly will.

The Eyes Of My Mother

Rotten Tomatoes' Critics Consensus states, "The Eyes of My Mother uses a shocking trauma to fuel a hauntingly hypnotic odyssey whose nightmarish chill lingers long after the closing credits." Partly inspired by the real-life story of serial slayer Ed Gein, this black-and-white 2016 feature offers plenty of creepy moments and unsettling images in an art-house approach to distressing horror.

Kika Magalhães plays Francisca, a woman whose unorthodox upbringing leads to horrifying results as she reaches adulthood and tries to build a new "family" of her own.

ee more on The Eyes of My Mother

On its surface, Raw is a 2016 film about a lifelong vegetarian who tastes meat for the first time in veterinary school and finds herself developing a cannibalistic hunger for human flesh. While that premise is more than enough to unnerve or disgust most audiences, the disturbing elements of this French-Belgian production extend beyond its most obvious shocks. The A.V. Club called it a "beautifully realized, symbolically rich, and disturbingly [sensual] meditation on primal hungers of all kinds."

In fact, ambulances were called to a midnight screening of the film at the Toronto International Film Festival when several moviegoers passed out from Raw's intense action.

Just as Jaws made audiences fear stepping in the open ocean, Karyn Kusama's The Invitation will make them fear dinner party invitations. Much like Jordan Peele's Get Out, The Invitation, released in 2015, trades in the creeping discomfort of social awkwardness for most of its running time. The film focuses on a man and his new girlfriend as they attend a dinner party at his ex-wife's house that dredges up bad memories and feels increasingly like a recruitment for a religious cult.

If social situations already make you feel awkward, The Invitation will make your skin crawl, and even the most jaded viewer will likely be freaked out by the film's final reveal.

See more on The Invitation

In 2017's The Endless, two brothers return for a visit to the UFO cult where they grew up, only to find that the goings-on are much stranger than they remember - and that escaping a second time will be much more difficult than they initially planned. Rather than exploiting gore or jump scares to convey a terrifying atmosphere, The Endless warps time and reality, making viewers question what they're seeing, just as the two brothers question the world around them.

From a struggle against something unseen in the night sky to strange rock formations and time loops, there's plenty of mind-bending weirdness in The Endless to leave viewers unsettled long after the end credits.

ee more on The Endless

Legendary Series YO! MTV Raps Returns Today On Paramount Plus!

All New Thor Love And Thunder Trailer Has Released!